On last night’s HBO‘s Real Time with Bill Maher, limousine liberal and Real Time host Bill Maher interviewed 2016 Libertarian presidential candidate and former New Mexico Governor Gary Johnson at the beginning of his show, talking about Bill seeing Gary’s name a lot lately because Gary is the third name in the race and that part of the reason there is so much talk about Johnson in the race is that they don’t like Donald Trump and Hillary Clinton.

Here’s the transcript of the discussion that transpired during the broadcast:

Bill Maher: You know, I, I see your name a lot lately, uh, because you are the third person in the race. Now you have to admit part of the reason why there is so much talk about you is they don’t like the other two.

Maher:[interrupting] And you’ll take it, right?

Johnson: Well, uh, but Bill Weld and myself are the only third party candidates that are going to be on the ballot in all 50 states. So there is a justification.

Maher:[interrupting]  Oh, you will be in all 50 states…

Maher: And you’re polling in about 10 percent. But if you get 15 percent in the polls, then you’re in the debates, and that’ll change the game, right?

Maher:[interrupting immediately] It is a rigged game.

Maher: But they, you know, Trump….

Johnson: But it is the way it is.

Maher: Trump says that too. But now, I mean, you were the Republican governor of, um, um, New Mexico.

Maher: [Interrupting again] Not now. Not when you were there.

Maher: But you’re not blue.

Maher:  [interrupting abruptly] And William Weld was a Republican, right? The point I’m making is you guys are….I don’t know….if you have changed so much, to me you just…you guys are Republican classic…

Maher: ….and Trump is Republican crazy or whatever. I mean, if this was, if this was, but what I’m just saying is if this was 25 years ago, you wouldn’t even be thinking about running as a Libertarian. You would be a mainstream Republican.

Johnson: Well, I always have been a libertarian by philosophy. I mean, recogni – or, uh, identifying myself as as a libertarian. Really, you could argue that I got to serve as a Republican, uh….

Maher: [interrupting once again] But I, I….

Johnson: I got to serve as a libertarian under, you know, the sheep’s clothing of being a Republican.

Maher: I read the Libertarian website. I mean, it’s like, woah, we want less government, and we’re gonna cut taxes. I’m like, “We already have a party that says that. It’s the Republicans.”  What’s the big difference?

Johnson: Well, being fiscally conservative and socially “we-really-don’t-give-a-damn” as you don’t force that on me. So people being able to make choices in their own lives. A woman’s right to choose, marriage equality, legalizing pot…[Met with an extremely loud applause from the audience]

Maher: Ok, but….but….with Donald Trump being the candidate, it seems to me that is kinda where the Republican Party has gone. Fiscally, they’re….I don’t know where they are fiscally ’cause he’s against free trade, but certainly on the social front? Donald Trump? Three wives? He…Maureen Dowd asked him about, uh, abortion, and he went, “Interesting question. What’s your next one?”

Maher: They don’t seem to care. The evangelicals like him. I mean, he is not the old school Republican.

Johnson: I think so. I think most sane people are actually Libertarian. It’s just that they don’t know it. [Loud laughter from a woman in the audience met with the audience applause]

Maher: But unfortunately….[Applause continuing and then dying] Unfortunately a lot of people who are not sane are Libertarian. I saw your convention. I mean, the vision of government is somewhere between, uh, colonial Williamsburg and Atlantis. [Johnson chuckles a bit][Loud laughter from the woman in that audience]

Maher: Uh, their economic theory is like, uh, “Mad Max takes your gas, and you die.” [Light laughter from the woman in the audience.] That…. I….there are some crazy people in your party. You got booed –

Maher: – for saying things that I don’t think are really out of the mainstream….like five-year-olds shouldn’t get to buy heroin.

Johnson:[Loud laughing woman in that audience] Or that, that I support drivers licenses as a competency to drive a car.

Maher: There was an issue about blind people getting drivers licenses, and those nuts were –

Maher: True. But somewhere along the way Libertarian, I don’t know, it gets –

Johnson: Well, the Libertarians did make me their nominee along with Bill Weld, so –

Johnson: I can definitely say….

Maher: You know, you are the top of the sane in the Party. You are the right guy. [Johnson chuckles] [Loud applause from his audience] So, uh, they want to abolish a lot of stuff. What do you want to abolish? They, you know, they don’t like any gun laws, they don’t like the Fed, and you know, the gold standard they want to bring back, I mean, some –

Johnson: Well, I mean, I may not be in, in, in those camps as much, but I do believe government is too big, it tries to accomplish too much.  By doing that, they tax. They take money away from me – taxes, and that’s money I can be spending on my own.

Maher: How much, how much would you cut defense? That’s where the rubber meets the road on that issue.

Johnson: Well, ideally, you set a target, uh, to reduce the spending when it comes to, uh, defense. But, hey, the key word is “defense,” not “offense.” And we need to stop with these military –

Johnson: Well, if you, the Pentagon itself says that we should reduce, uh, bases in the United States by 20 percent. That hasn’t happened because congressmen and women stand up for those bases in their states, and that’s why that doesn’t happen. But, uh, look, yes, we can, we can cut, uh, spend, expenditures –

Maher: – give me a number. I mean, we probably spend a trillion when you add in the nukes and the wars and the stuff we put off the books.

Johnson: Well, I think you can target 20 percent –

Johnson: – and that wouldn’t be the end of the world.

Maher: Wow. You’re saner than I thought. [Johnson chuckles, and a loud applause from the audience goes off] I was hoping…I was hoping you’d say 50. Ok. So….

Johnson: – looking to be elected President of the United States, since this is gonna have to be something that will have –

Maher: And you have said –

Johnson: – to come out of Congress.

Maher: You have not smoked pot in, what, eight weeks?

Johnson: Well, with, the legalization of marijuana, marijuana products are edibles. I had edibles about eight weeks ago.

Maher: Ok. [Loud applause with Johnson chuckling] But you have said, and I think this is prudent, that, uh, even though you do enjoy marijuana, when you’re in office you won’t because, you know, the 3 A.M. call –

Johnson: – and actually running for President is a 24/7 –

Maher: So what’s that like not, not being high? [Applause from audience with Johnson lightly chuckling]

Maher: Lots of presidents were completely plod. Nixon, when he was going through Watergate, was going, “Guh, guh, guh, guh” every night. We know that. [Chuckles and laughter from the audience and from Johnson]

Johnson: – able to make their own choices, and in my particular case, and I’m just speaking for myself –

Maher: I hope you really get into the debates, because that would be great. [Loud applause from the audience and smile from Johnson] Thank you, Gary Johnson.

Here’s the video of that interview on Real Time.

Of course, that limousine liberal had to smear Libertarians at our Libertarian National Convention at the Rosen Centre Hotel in Orlando, Florida at the end of May 2016 for being “crazy” because of the sane ideology that we have. He blew all of our ideas and principles out of proportion and assassinated our characters in the name of keeping his so-called “relevant” talk show high on a worthless premium cable channel. 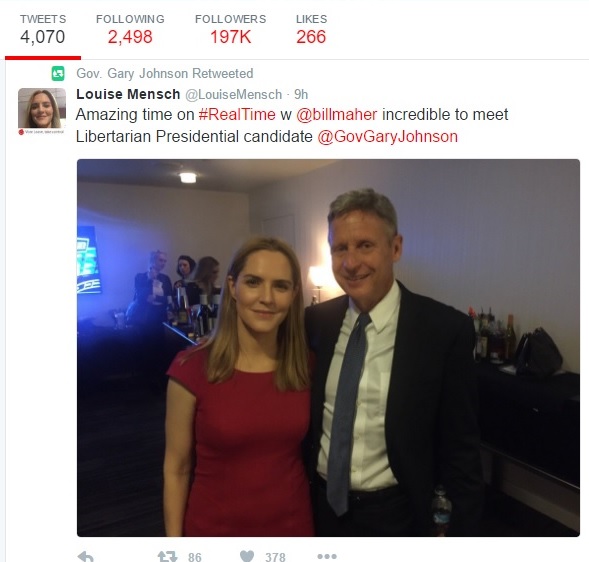 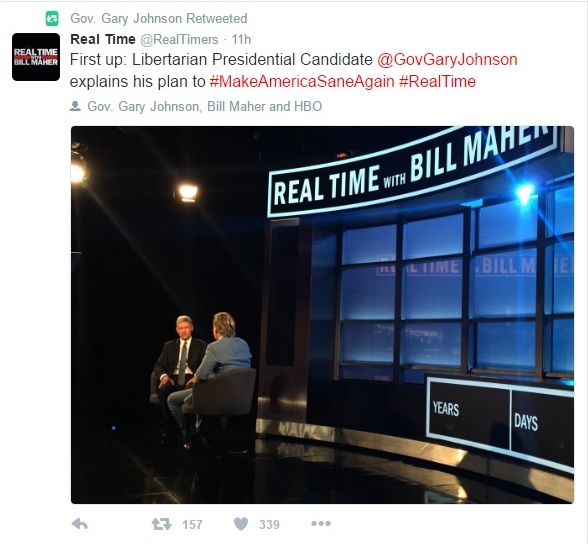 Overall, the interview was….well, not bad. I just find it interesting that Maher erred on two things:

I can’t stand that snarky limousine liberal son of a bitch.