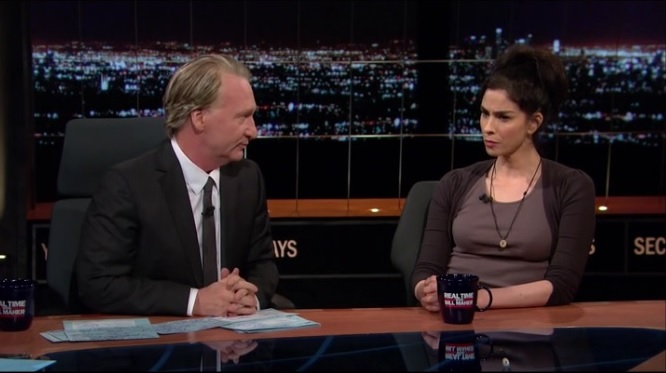 HBO‘s Real Time with Bill Maher host Bill Maher, while interviewing show guest and comic Sarah K. Silverman, went on a “whiny-liberal-prick-and-bitch-fest” over Libertarian presidential candidate Gary Johnson because a poll directed at a demographic of 18 – 34 years old people was issued with results indicating Hillary Clinton was at 31%, Donald Trump at 26%, and Johnson….at 29%. That pissed off Bill Maher, who immediately with the help of Silverman called Johnson “a fucking idiot.” Of course Maher proceeded to state that Johnson was in Maher’s “basket of fucking idiots.”

Here’s the entire clip of the segment as follows:

This is what took place as the following in this transcript of the segment of the show:

Maher: ….is a fucking idiot. [Audience laughs and claps.]

Silverman: [Talking out loud through the audience clapping] I thought he was a fucking idiot.

Maher: I like him. He’s a nice guy, but he’s another in my basket of fucking idiots.

Silverman: Listen, I…I voted, and I believe you did, in 2000 for Ralph Nader.

Silverman: But this is not that kind of time.

Maher: [Talking over Silverman while she was making her above comment to him] But he wasn’t an idiot.

Silverman: No, he wasn’t an idiot.

Maher: [Syncing his comment with hers] Right, he wasn’t an idiot.

Silverman: But he wasn’t gonna win.

Maher: [Talking over her again] No, and it was a mistake.

Silverman: [Talking over Maher at the same time] We wanted to vote our conscience.

Maher: I admitted it.

Silverman: It was a mistake.

Maher: Ok, but Gary Johnson…can I show you a little….we put a little montage –

Maher: –  of Gary Johnson together just to rem – and, and we all thought, thought he was a cool guy. You know, he smokes pot, he was [panelist Angela Rye snickers] for pot, but he does not make pot look good by the way.

Silverman: [Interrupting Bill as he says the “by the way” words] Pot doesn’t make you cool.

Silverman: [smiles and gives a slight laugh but also agrees with him]

Maher: Here’s a little bit of Gary Johnson for those thinking of voting for him.

Maher: Really? [Audience laughs cruelly] And….by the way, for the people, 29%, 18 – 34, who I assume were Bernie people, right? Ok, here’s some, uh…minimum wage…..Hillary’s with Bernie. Not Gary Johnson. He believes in no minimum wage. TPP [Trans Pacific Partnership trade deal]……he’s for that. Hillary and Bernie are against it. Citizens United…..all the money you want in politics! Gun control….[Johnson] wants none of that. Financial regulation, universal health care….he is for repealing ObamaCare. Free college….he’s against that. He’s for nothing you fucking people want!

Silverman: It’s not even like it’s any….no one’s misinforming them about him –

Silverman: – like they are….like with your friend. You know, it’s like people…..people of  [unintelligible, because Maher and two members of the panel are laughing] what, what….

Silverman: What you were saying was exactly right. People vote because they’re totally misinformed, and that is a real thing. You know, there is something called Brexit that people voted for totally against their best –

Rye: Are you serious? [looking at Steve]

Moore: [Talking over Silverman] Brexit is great, self-government-wise! What were you, why were you against Brexit?

Silverman: [interrupting Steve] What are you talking about? They promised…they had huge signs on the sides of buses that said, ” You know, $325 million goes to the EU [European Union] that could, could be going to our health care.

Silverman: They had *NO*  intention of sending it, no intention of Brexit voted through. Then people are Googling what Brexit is after they voted it in.

Silverman: [Interrupting Maher once again] Oh, don’t show my neck. My neck goes crazy when I have passion.

Maher: You know, you know….

Maher: You know what would help a lot. Exfoliating! [Then bursts in snickering laughter]

Silverman: [Smiles with her mouth open] Good! I think of you every day!

Hamby: Gary Johnson is clearly unfit to be president. What exacerbates me about Gary Johnson not knowing these things – and the collective exacerbation about it – is that neither does Donald Trump.

[The audience applauses while Hamby and Maher say those things.]

Hamby: And the problem is that a year ago people should be giving Donald Trump pop quizzes: Name me five countries of NATO. What’s the difference between Hamas and Hezbollah? How does a bill become a law? [Everyone begins to speak at once] Doesn’t Donald Trump know this?

Maher: [interrupting Hamby] No, he doesn’t.

Hamby: I don’t think he does.

And so the entire segment ends there. But it’s not a surprise given the hostile nature of the panelists involved in the Gary Johnson – and some Donald Trump – bashing.

Because of this episode, I have cancelled my DVR subscription to Real Time. I am no longer watching the show because Maher and his weekly panel of guests galore are toxic. They are filled with hatred for liberty, hatred for liberty, and hatred for individualism and free markets. They sure do love their liberal statism. And that has become the top, cardinal hallmark of Real Time with Bill Maher.

The Aleppo incident was launched by Mike Barnicle on MNSBC‘s Morning Joe to attack Gary Johnson, disparage him, and to throw a gotcha question at him, considering he threw in the Aleppo question at Gary during his interview on the show just to catch him off-guard.

The question that Barnicle asked was the following:

What would you do if you were elected about Aleppo?

Johnson was puzzled by that question. He asked:

And what is Aleppo?

Barnicle was shocked at his answer. He asked the following interrogative to Gary:

Aleppo is in Syria. It’s the, uh, the epicenter of the refugee crisis –

Of course, it’s not like Johnson *REALLY* didn’t know what Aleppo was. He did acknowledge that he thought Barnicle was asking him about an acronym, although he admitted that it was no excuse, and he sincerely apologized for it. But Barnicle’s question was poorly worded and quite vague. Remember, we are dealing with a hack writer who resigned from The Boston Globe over two columns written three years apart from each other. One column contained some lines that resembled jokes that were pilfered from the late George Carlin‘s 1997 book Brain Droppings.

The following Wikipedia pic evidences that in great detail.

Oh, as for the cancer-afflicted kids in the second column? The Globe was unable to find Barnicle’s sources and couldn’t publicly identify them, and yet Barnicle defended his column, saying that every word he wrote was true.

So we have a disgraced writer who is the co-host of a network morning TV show who plagarized from a deceased comic by stealing jokes and using them as his own without any attributions or references to Carlin and who deceived his readers and the Globe by writing a column that failed to identify the names of the kids’ parents, and only got this non-fact-checked story from a nurse whose own credibility can be measured by the digits of her hands.

And, of course, Mike Barnicle says, in a Daily Beast column, he “doesn’t blame Gary Johnson.”

Oh, but we have to ignore Johnson’s great responses about our foreign policy of interventionism (which he argues should be one of non-interventionism), calling for the end of the Drug War, calling for the strong reformation of our judicial system, and restoring our free market. Oh, and yeah, he even had great answers regarding Syria, our crushing of foreign regimes and our giving those countries weapons which land in the hands of ISIS, and a free market would end climate change. How about that for a change?

Yes, Gary drew a blank on that question and the Aleppo question, but so what? Did Trump not have more embarrassing gaffes? Did Clinton not come up with the mediocre responses to those questions?

Yes, Bill Maher. Gary Johnson. He’s not “a fucking idiot.” It’s funny that you knock him down after you had him on your show for an interview, and you were even condescending to him then. It doesn’t mean anything to you that you cherry pick “facts” and present them to your audiences *AS IF* they are true, and you and I and everyone know they aren’t. You’re the one who doesn’t have his facts; I do. As a Johnson supporter, I know this, and yet you don’t.